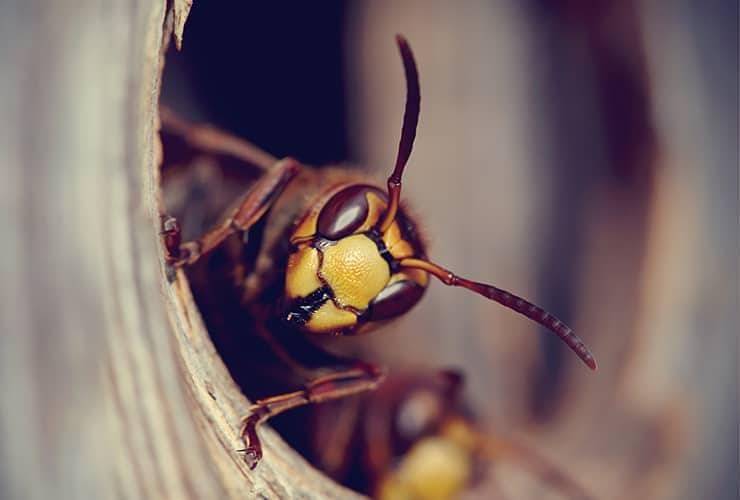 When summer turns into fall in South Carolina, the stinging insects enter their most active season. While the temperatures are finally at their most comfortable and people want to spend more time outdoors, remember that stinging insects are more of a threat in the fall as they increase their foraging to ensure they have enough food for themselves and their queen to overwinter. No one wants to share their backyard or picnic area with stinging insects!

Yellow jackets, wasps, and other stinging insects become agitated and aggressive when they are foraging and preparing for winter. This is the time of year when they are more likely to sting without warning or cause. Whatever you do, do not swat at a yellow jacket or wasp that flies near you as it will provoke an attack this time of year! Stay as calm and still as you can when you hear the buzzing around you, and should a stinging insect approach your face, blow some air out of your mouth and/or nose to help them fly in the other direction.

It is also during this late summer and very early fall time period in South Carolina that the queens of the colonies produce a large number of eggs that create new queens and male stinging insects. The new queens start their own nests nearby, adding to the population of stinging insects, and prepare to overwinter and establish their colonies the following spring.

According to the National Pest Management Association (NPMA), more than 500,000 people visit the emergency room annually as a result of stinging insects. The majority of patients have localized swelling and pain from the insect sting that is easily treated, but about 3% of the population is severely allergic and experiences life threatening reactions. If you are stung, seek medical treatment immediately if your tongue feels thick, you have shortness of breath, or have severe swelling.

When these insects are foraging for food, you can help reduce the number of insects in your yard by keeping all food sources, including sweet beverages and your garbage tightly covered and put away. If there is nothing in your immediate area to attract the stinging insects, they’ll go off in search of food further away and leave you in peace!

If you have an unusually large number of stinging insects around your home, call Spencer Pest Services for help locating and removing the nests.